Covid-19 and Commercial Leases, Rent, and Evictions: A Guide for Landlords

May 14, 2020 by Martin Arguello Blog
Home | Blog | Covid-19 and Commercial Leases, Rent, and Evictions: A Guide for Landlords

What if my tenant does not pay rent during the Covid-19 economic shutdown?

The duty to pay rent is not necessarily suspended by the Covid-19 “stay at home” or “shelter in place” orders.  Not necessarily.  If that sounds like lawyer speaking, it’s because it is.  There are some possible exceptions or defenses to the duty to pay rent on a commercial lease, and I will go through them below.  However, at the end of the day, it will be a case-by-case determination for a court unless the commercial landlord and tenant can come up with an out-of-court solution.

Let’s talk about that for a moment.  Like most things in life, going to court to resolve this problem is not the ideal solution.  Your first step as a commercial landlord should be to communicate with your tenants and get a feel for how their businesses are being affected by the Coronavirus (Covid-19) shutdown.  Many businesses will only be partially affected, and with government assistance like the Paycheck Protection Program being administered by the Small Business Administration, many businesses should be perfectly capable of continuing to pay rent normally.  After all, the Paycheck Protection Funds are supposed to be used, in part, for rent payments.  Well, at least as long as those funds last.  As of the writing of this post, the Paycheck Protection Program is out of funds, but it does seem almost certain that Congress will be providing additional funds shortly.

If you have a tenant that is being severely affected by the shut down, and they are expressing to you that they will be unable to make their rent payments, my advice is to try to work with them.

If you have a tenant that is being severely affected by the shut down, and they are expressing to you that they will be unable to make their rent payments, my advice is to try to work with them.  Several possible solutions come to mind: amortize or spread out the missed payments through the rest of their lease, for example.  I.e., if a tenant has 20 months left on their lease, and they miss 3 months of $2,000.00 a month rent, spread out that missed amount, $6,000.00, over the remaining 17 months.  Also, be kind about late fees.  Let’s face it, the whole country is suffering, and just because you can, under the commercial lease, charge a late fee, doesn’t mean you have to.  After all, if your aim is to keep the tenant through the remainder of their commercial lease, you don’t want to make it impossible for them by piling on charges.  For that matter, you might consider discounting the missed months—say, March, April, and May—and charging $1,500.00 instead of $2,000.00 for those months.  The possibilities are limited only by your imagination.

All good intentions aside, sometimes these things cannot be worked out amicably.  Then it’s time to consult a Landlord-Tenant lawyer like me, Martin Arguello.  As I said before, these cases will be judged on a case-by-case basis.  There is no bright line rule that will apply to all circumstances.  The rule of thumb is that the duty to pay rent continues.  Some of the possible exceptions to that rule are discussed below.

1. Impossibility Due to Illegality

These defenses have some really legally-technical sounding names, but they are not that hard to understand.  I will try to explain them in the simplest way possible.  Impossibility due to illegality is basically when an activity contemplated by a contract is made illegal by a change in the law.  For example, in the commercial landlord-tenant world, if a Tenant has a lease in order to operate a gym, and after the lease is signed the State passes a law saying that it is illegal to operate a gym, then the purpose of the contract has been made illegal and the contract is unenforceable.

This defense is over a hundred years old.  In Centex Corp. v. Dalton, the Supreme Court of Texas explained that the “…performance of a contract is excused by a supervening impossibility caused by the operation of a change in the law.”  Further, a “…governmental…order” is recognized as one of the things that can make performance impossible due to illegality.

In Texas, the Governor, Greg Abbott, declared a state of disaster due to Covid-19 on March 13, 2020.  On March 19, 2020, Mr. Abbott issued an executive order which, by its own terms, was not to be called a “shelter in place,” order; although, it really was.  The order prohibited Texans from “eating or drinking at bars, restaurants, and food courts, or visiting gyms or massage parlors.”  Thus, a tenant running a massage parlor cannot operate during the term of the order because the governmental order has made it impossible for him to operate legally.  Local governments have gone further.  On March 11, 2020, for example, Harris County Judge Lina Hidalgo declared a state of disaster.  On March 24, she issued a “stay-at-home” order for the residents of Harris County (except for essential activities).

Of course, no rule in law would be complete without an exception to the exception.  There is a possibility, based on some Court of Appeals decisions, that the defense doesn’t apply if the impossibility is “subjective,” which occurs when the impossibility is “due wholly to the inability of the individual promissor.”  But, there are counter-arguments to that counter-argument as well.  If you’re to this point in a commercial landlord-tenant dispute, you definitely should have an attorney like Martin Arguello who specializes in commercial landlord-tenant disputes representing and advising you.

In Chevron Phillips Chem. Co. LP v. Kingwood Crossroads, L.P., the court of appeals recognized the affirmative defense of Impracticability.  The defense goes as follows:  “Where, [a] after a contract is made, a [b] party’s performance is made impracticable [c] without his fault [d] by the occurrence of an event the non-occurrence of which was a basic assumption on which the contract was made, its duty to render that performance is discharged, unless the language or the circumstances indicate the contrary.”

That’s a mouthful, isn’t it?  Let’s start with the meaning of the word, “Impracticable.”  Dictionary.com defines it, in part, as, “Incapable of being put into practice with the available means.”  So, that’s a fairly high standard.  Unlike “inconvenient” or “impractical,” the bar is set much higher in “Impracticability.”

And what’s this language about occurrence and nonoccurrence and basic assumptions?  Well, it means, just like with the Impossibility Due to Illegality defense, that there is a change in the circumstances after the contract is signed which was not foreseen.  The Covid-19 shutdown certainly seems to fit this description.  Who could have foreseen that all this would happen?  Thus, in most commercial leases, it was an unspoken assumption that a pandemic and the government response we have seen with Covid-19 would not happen.  Because it did, a commercial tenant has a possible defense against paying rent:  if they cannot operate because of the new government restrictions, then performance (paying rent) under the contract has become impracticable because they have no income. 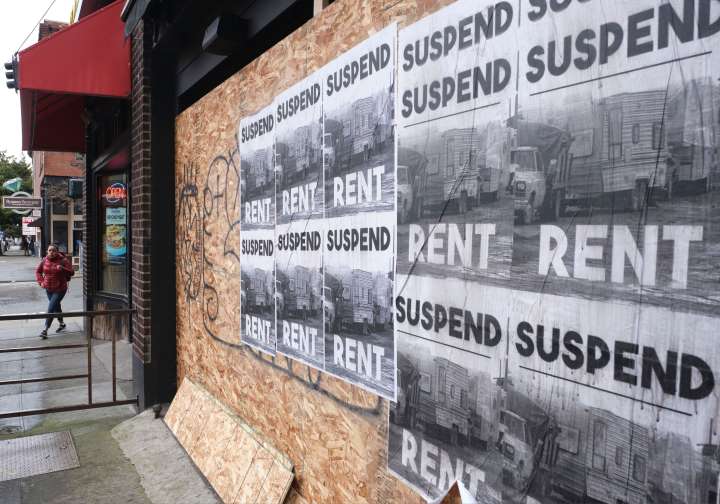 For current tenant-landlord disputes, they should be case-by-case evaluations. Contact us for more details.

The Court of Appeals in T.E.C. Olmos, L.L.C. v. ConocoPhillips Co., stated that “Force-Majeure” refers to an event, such as an ‘Act of God,’ beyond the parties’ reasonable control that intervenes to create a contractual impossibility and thereby excuses contract performance.  However, “In contract cases, the rule is that an act of God does not relieve the parties of their obligations unless the parties expressly provide otherwise.”  G.T. & M.C., Inc. v. Tex. City Ref., Inc.

What does this mean?  It means that unless the commercial lease has a Force-Majeure Provision, the defense is not viable under general contract law.  Again, this becomes a case-by-case evaluation.  If the lease addresses a possibility like government orders shutting down the economy, then the terms of the lease apply.

The term “Frustration of Purpose” only appears in twenty-nine Texas Civil cases.  In some, Texas Courts seem to think that it’s the same thing as the impossibility or impracticability defenses.  But there is at least one case where a Houston Court of Appeals says It has “recogniz[ed]…frustration of purpose as an excuse[] for non-performance.”  Tractebel Energy Mktg., Inc. v. E.I. Du Pont de Nemours & Co. (Houston 14th District Court of Appeals).  The defense is distinct from impracticability because there is no impediment to performance by either party with frustration of purpose.  Instead, it applies when a “change in circumstances makes one party’s performance virtually worthless to the other, frustrating his purpose in making the contract.”

So, for a Tenant who entered a commercial lease to operate a gym, the landlord’s performance in providing the premises has been rendered totally worthless, at least for the time of the shutdown.  Of course, one can argue that it is not totally worthless.  After all, all that gym equipment is still there being sheltered by the building.  Again, it’s a case-by-case evaluation.